The major reason I’m in South Sudan this month is to visit some of the students I met last year when I was at Bishop Gwynne College in Juba. I want to learn about the context in which these students minister as a way to think more about what unites us as Anglican seminarians and how best to support them in their education.

I had a chance to do just that last week in Aweil. After teaching the clergy, I went with Paul, one of my classmates at BGC last year, to see his church. Here he is with his family (and a visitor) in front of his house.

During the war, Aweil was occupied by the northern army. The only church presence was the Catholics, who have been in this area for decades. The Episcopal presence, by contrast, only dates to the late 1980s and there were no Episcopal churches in Aweil during the war. Dinka who ventured too close to the city were shot. So the church grew in the rural areas but not in Aweil. (This region – Northern Bahr el Ghazal – is where Achak Deng, the author of What is the What, a book that did much to introduce Americans to the Lost Boys, is from. It’s also where Abraham Nhial, author of Lost Boy No More, which preceded What is the What, is now bishop.)

That changed after the signing of the Comprehensive Peace Agreement in 2005. Paul, who had been ordained in the bush, moved to Aweil with his family and began an ECS church under a tree. It quickly migrated to the rough shelter under which the congregation now meets – about 300 people, on average, per Sunday. Paul is the only priest, though he has one deacon and a lay evangelist to help him out.

The church is trying to build a more permanent structure for itself. They had the money to put up the walls. They’re still looking for the money to put on a roof. When (not if) it is finished, it will be the largest Episcopal church building in the diocese. 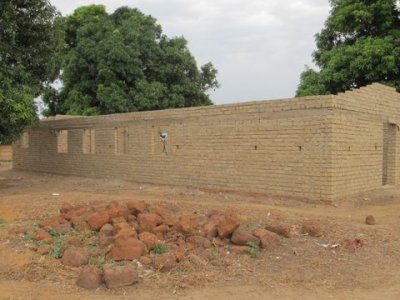 The neighbourhood where Paul’s church is is a new part of Aweil. It is all people like Paul who have moved back to the city after the war. Social services have not quite caught up with the population growth. There is no school in the neighbourhood, which means these children have nothing to do during the day.

The church would like to start a school and help fill some of the other needs in the community. But those things take money and the church doesn’t have a lot of that at the moment.

One sharp contrast between Sudan and Nigeria is in stewardship. In Nigeria, the prosperity gospel has hugely increased giving to the church, allowing the church to do quite a lot in some parts. In Sudan, giving is anemic. This past Sunday I preached at a church where attendance was nearly 900. Collection receipts? Less than $100 – and I know I gave about 10-percent of that. People here aren’t rich but that is still abysmal giving. Say what you want about the prosperity gospel – and I can say quite a few negative things about it – but it increases giving. One church I preached in in Nigeria had an attendance of 14 and collection receipts of about $25. Perhaps Paul’s church needs a little dash of prosperity gospel. Of course, can you ever have something like a “little dash” of prosperity gospel? Or will it just take over the church entirely?