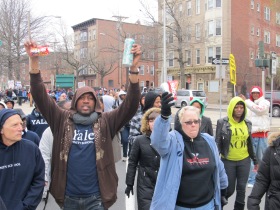 Last year, when Trayvon Martin was killed, I put on my clerical collar and joined a march in New Haven, Connecticut, protesting the shooting and the apparent inaction of authorities in arresting the shooter, George Zimmerman. Our claim was one of justice—the shooting was an injustice and it needed to be remedied. “No justice, no peace,” we chanted. The speakers that day called for the arrest and trial of George Zimmerman. That is, they wanted to remedy the injustice of the death by applying justice to the situation. We call our courts the “justice system” after all.

We got what we wanted. Zimmerman was arrested, tried, and, as we all know by now, acquitted. No one seems satisfied with the outcome. Our desire for more justice has not remedied the injustice of the situation.

There are many ways to think about this verdict—for instance, there may be unjust laws that, when applied in the context of the justice system, produce unjust results—but I am struck by this disjunction: as protestors, we got what we wanted—but no one is now satisfied.

Jesus once told a story (Luke 15:11-32) about a son who (justly) demands his half of his inheritance early. The father (justly) gives it to him. But then the son squanders it and comes home. The elder son (justly) says the younger son has no claim on anyone. But the father runs out to meet his younger son and showers him with forgiveness. You can hear the father saying, “Forget justice; forgiveness brings my son back.”

Forgiveness does not stand alone, however. It is closely linked to another idea Jesus taught—repentance. The younger son had to acknowledge he was wrong, turn again (the literal meaning of the word “repent”), and come home to know his father’s forgiving love.

The tragic truth is that nothing will bring Trayvon Martin back in this life. Lamenting his loss and mourning his death are important tasks and we should not move quickly past them. But I have been wondering what role forgiveness and repentance plays in all this. Can we repent of the way racism infects our daily interactions? Can we see the new possibilities that God is opening up for us? Can we forgive George Zimmerman and pray he sees his way to a grace-filled future?

I hope so. It’s the direction the Gospel is always calling us to go.

(My thinking in this post is influenced by the wonderful piece Samuel Wells wrote for The Christian Century some months back and a post from seminary colleague Josh Rodriguez.)