On Sunday, I went to church with some of the Zande-speaking students. I had thought that the service would be in Zande but it turns out that the congregation is from all over Western Equatoria province and their common language is Arabic. Worship in Arabic is one of many new experiences for me in Sudan. It’s jarring that Christian worship can happen in a language that is so closely associated with one faith.

By the standards of this trip, it was a small service. There were maybe 150 people in attendance. The building was mud brick with a tin roof and dirt floor. The pews were little mounds of a mud/cement mixture. 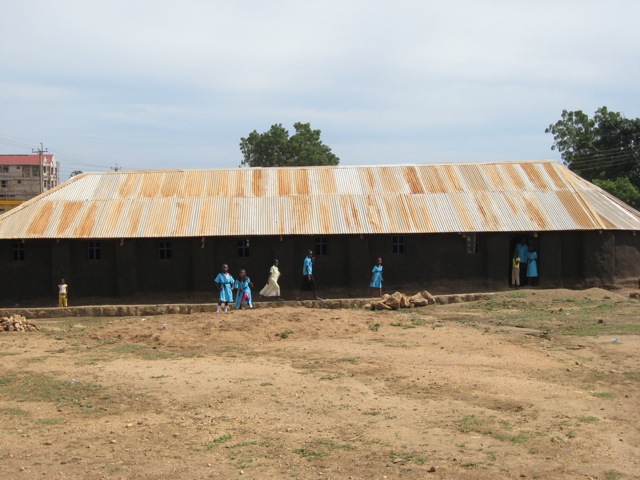 (At the very end, everyone gets in a receiving line and shakes hands with everyone else. I felt like a politician.)

Since the Episcopal Church of Sudan doesn’t have a common prayer book, different churches use different liturgies. Some borrow from Kenya, others from the Church of England’s Alternate Service Book, and others from places I’m not familiar with. This church had a translated liturgy and did Morning Prayer. Once they got to the pronouncement of the grace, I figured we were getting close to the end.

Ha! It turns out the liturgy was just the warm-up act for the main event: singing and dancing numbers from the Sunday school, introduction of visitors, announcements, the offering(s), singing and dancing numbers from “the youth” (anyone under age 45, it seemed), a sermon, and more. It turned into a knock-down, drag-’em-out three-hour affair of the kind I well remember from my time in Mthatha, South Africa.

The difference is that in Mthatha, the prayer book liturgy pervaded the entire service. The service was long because we had an expansive liturgy. Here, the liturgy seemed to be something to be gotten through so they could move on to more interesting things.

Sudan was evangelized by the low-church Church Missionary Society, South Africa by the high-church Society for the Propagation of the Gospel. That goes a long way to explaining these differences. (And the many other differences. I haven’t smelled even the tiniest whiff of incense or heard a single bell my entire time in Sudan whereas in Mthatha I couldn’t go five minutes in the service without being knocked out by the smoke or deafened by the bells.)

Still, it’s interesting. In South Africa, the prayer book so closely associated with the Church of England and Anglicanism in general has been enculturated and made a part of their worship in a really deep way. Here, the enculturation seems to be different – use the liturgy and then tack on the additional stuff. Both are legitimate. But one of the things that is supposed to unite Anglicans is a common style of worship. Things have felt very different to me in Sudan than they did in Mthatha and yet they are both ostensibly Anglican services.

Whatever the case, my time in Sudan has dealt a death-blow to the best idea I ever had to promote Anglican unity: synchronized acolyting competitions. In Mthatha, when I watched the 20-odd acolytes go through their paces, I was really impressed. In Sudan, I’ve hardly seen a single acolyte at all. Even a Rite-II, middle-American, suburban Episcopal church could beat these guys!