I’ve just returned from pilgrimage to Canterbury Cathedral in England, the “mother church” of the Church of England and the Anglican Communion.

There is much that is moving about Canterbury—the site of Thomas Beckett’s murder, the throne of St. Augustine, the lively and vibrant congregational life that makes this cathedral no different than a country parish on Sunday mornings, the fabulous choir that leads Evensong every day.

But what I found memorable was the visit—in the rain—to St. Augustine’s Abbey a short way from the cathedral. Augustine was sent by Pope Gregory in the late sixth century to evangelize the Anglo-Saxons. Augustine set off but got cold feet and turned around in France. When he returned to Rome, Gregory sent him off again—this is immortalized in stained glass in Lambeth Palace that has Gregory pointing and saying to Augustine, “Go!”—and Augustine eventually showed up in what is now Kent.

There, he met Queen Bertha, who was from the Continent and already Christian. Together, the two of them set about evangelizing the area, eventually converting Bertha’s husband, Ethelbert. And so Christianity was reintroduced to this part of the world. 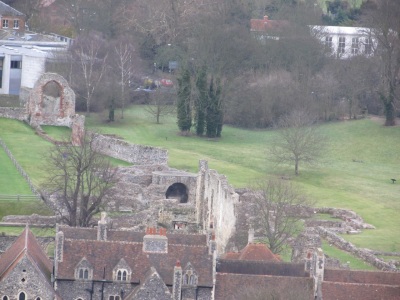 The ruins, from the cathedral tower.

Augustine is buried in the abbey and his grave is a pile of stones. Our group thought about what it says about Anglicanism that our notional founder is buried in such modest style. The contrast with, say, St. Peter’s Basilica in Rome, is stark.

For a long time, the abbey in Canterbury was a major centre of religious life. But then the Reformation came along and Henry VIII shuttered the monasteries. The abbey was put to a number of purposes but eventually abandoned and left to fall further into ruins.

In the nineteenth century, this began to change. A missionary college was built near the ruins and the ruins were preserved. Thus, at the same site at which Augustine arrived after being told to “Go!”, scores of British missionaries were trained to go out into all the world, spreading the Gospel, and laying the foundation for our contemporary Anglican Communion.

For all that we get squeamish these days when we recollect the mission past, when I was standing in the ruins of St. Augustine’s Abbey last week, the word “Go!” was sounding in my head like a gong. Movement—across barriers and boundaries of language, culture, race, class, sex, identity, and so on and so forth—is at the heart of our Christian faith and the abbey ruins reminded me powerfully of it.

We returned to the cathedral for Evensong that day and the lesson was from Genesis 12. God said to Abram, “Get up and go to the land that I am showing you.”