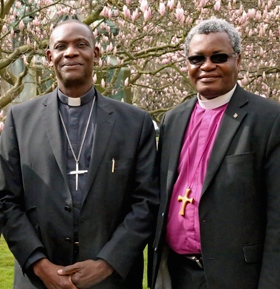 In the last number of years, I’ve spent a significant amount of time traveling in the world church meeting, talking, and praying with Anglicans from a wide variety of backgrounds. Part of the impetus for this travel was to help other Anglicans understand how the American Episcopal church in which I was raised had reached decisions that seemed to them nonsensical, controversial, and unBiblical.

If there was one theme I kept returning to in so many of my conversations it was this: there is more to one’s Christian faith than one’s position on sex and sexuality. It may sound surprising that this has to be said. But for some African Anglicans I encountered, the only things they knew about the American Episcopal church was that it had a bishop (later two) who was openly gay and was making decisions that would allow weddings between two people of the same sex to take place in church. This information—and only this information—had been used by more than a few African Anglican leaders to loudly condemn the American church.

I understood that part of my role in these conversations was to show that, in fact, there was a lot more going on in the Episcopal Church than these decisions about sexuality (important as they may be) and that these decisions about sexuality came from a full and whole understanding of the Christian Gospel. My conversation partners didn’t always agree with what I said but I was usually pretty confident that we parted ways agreeing that there was more to the Christian faith than one’s beliefs on sexuality.

But now I wonder if I made a mistake.

It has been striking how in recent years there is an increasing willingness among all parties in the church to evaluate other Christians entirely on their views about a handful of topics related to sexuality. Two years ago, the fine and able Malawian bishop, James Tengatenga, was appointed to a position at Dartmouth University. Within days, attention was drawn to comments he had made regarding sexuality, offense was taken, and demands were immediately made that the appointment be rescinded. As later conversation would reveal, the comments were made in a particular context. Divorced from that context, they made little sense. But it was too late. Tengatenga lost the position. The only qualification that mattered was his views on sexuality. When they—apparently—failed to measure up, his history of accomplishments became meaningless.

This week, it happened again. Josiah Idowu-Fearon, bishop of Kaduna in Nigeria, was appointed Secretary General of the Anglican Communion. I have never met Bishop Josiah but when I traveled in Nigeria a few years back, I heard much of him. I heard that he is a man of deep accomplishment who has endured significant setbacks and opprobrium within his church because he has consistently argued against divisive steps taken by leaders of the Nigerian church. I also knew his diocese has a long-standing relationship with a congregation in the Episcopal Diocese of Connecticut.

Almost immediately, however, the Tengatenga-ing of Bishop Josiah got underway. Some comments of Idowu-Fearon’s about sexuality were found on a Nigerian news site. All of a sudden, the only thing that mattered about Idowu-Fearon was what he had said on one occasion. The loudest voices making these arguments appear to be those who had never met Bishop Josiah. Those who had met him were making significantly more nuanced and positive comments but were quickly drowned out.

There seemed to be little effort to understand the context of the remarks, a lesson I had hoped we had learned in the wake of Bishop Tengatenga’s situation. (The context of talk about sexuality in Nigeria is complex and maybe I’ll write a separate post about that when we’re not in the middle of the holiest days of the Christian year.) Nor was there any effort to think about how else Bishop Josiah has walked the Christian way in his life and how that might influence his performance as Secretary General.

Not only is it wrong to criminalize homosexuality (though we should understand the impetus for some of this), the church should be a place that welcomes all people regardless of sexual orientation into the transforming love of God. These are precisely the arguments I have made in these many conversations with Anglicans around the world.

Yet I also think that the depth of God’s love for the world cannot be summarized simply by talking about sex all day long. It is right that we should inquire about Bishop Josiah’s position on contentious issues before the Communion. (A similar inquiry took place when the previous Secretary General was appointed ten years ago, leading to upset among some Nigerian and other African Anglicans. But that was before Twitter was invented.) But it is also right that being in the church means we are called to encounter the whole person whom God has created and ask how we are to relate to them. In the end, we may conclude that the person is not fit for the role in question. But we would at least have a full sense of someone.

I’ve written in the past that the mission of the church can be understood, in part, to be helping the world deal with complexity. But in order to do that, we need to react to situations less along tribal lines and more along the lines of the baptismal relationships which undergird our life together. If we’re serious about reconciliation, it would be a useful place to begin.

Fifty years ago this week, Anglicans from all over the world gathered in Toronto for the second post-war Anglican Congress. The meeting was fruitful in a whole variety of ways, but what it is especially remembered for is “Mutual Responsibility and Interdependence in the Body of Christ,” a manifesto that set forth a new way of being the worldwide body of Christ.

In a Church Times op-ed this week, I argue that the vision set forth in MRI is as valuable and relevant to Anglicans now as it was fifty years ago:

In its emphasis on the patient work of building genuine relationships across lines of difference, the importance of genuinely coming to know one another in the context in which each lives, and above all in its recognition that God is always calling us to something greater than ourselves, MRI has much to teach us.

It is risky to reach out to those who are different from us, and daring to ask what we might learn from someone from a different background. But it is precisely these things that are at the heart of what it means to be God’s people in the world – a fact that is no less true today than it was in August 1963.

By chance, the anniversary coincides with the news that Bishop James Tengatenga’s appointment at Dartmouth University has been rescinded. I have nothing to add to this depressing piece of news that has not been said elsewhere—particularly by Bishop Michael Ingham—except to note that the controversy over the appointment sadly demonstrates the point I was trying to make: it truly is challenging to reach out and encounter those who are genuinely different than us and see what it is we can give and receive from them.

The Church Times article on MRI is the first of two I’ve written about the anniversary. Look for a separate article coming soon in The Living Church.

And if you never have, why not take the time to read the text of MRI?