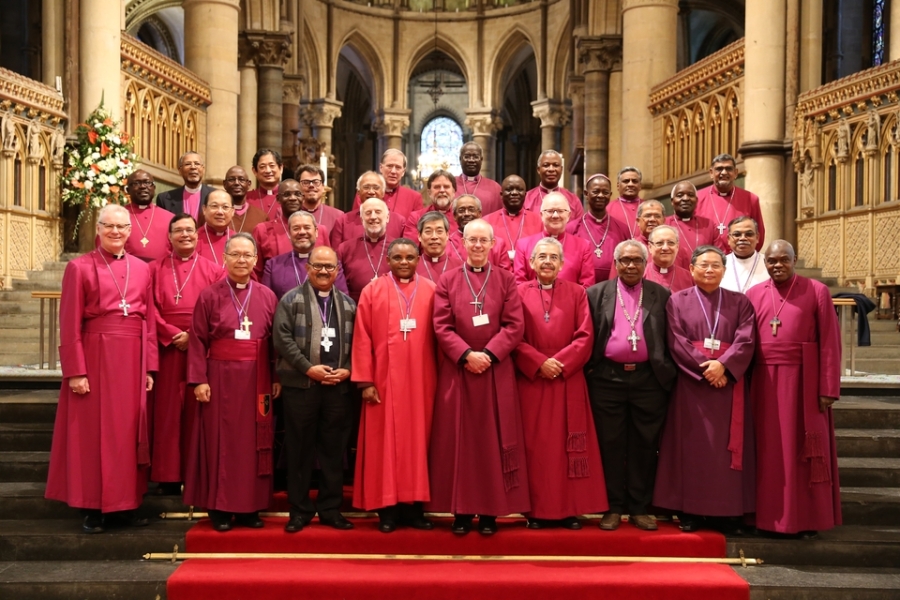 Leaders of Anglican churches around the world will be gathering in Canterbury next week. It’s a so-called “primates meeting,” named because each is the chief bishop in his—and they are all men—church. The last of these meetings was held in January 2016. Here are some of the things I’ll want to learn as this meeting unfolds. 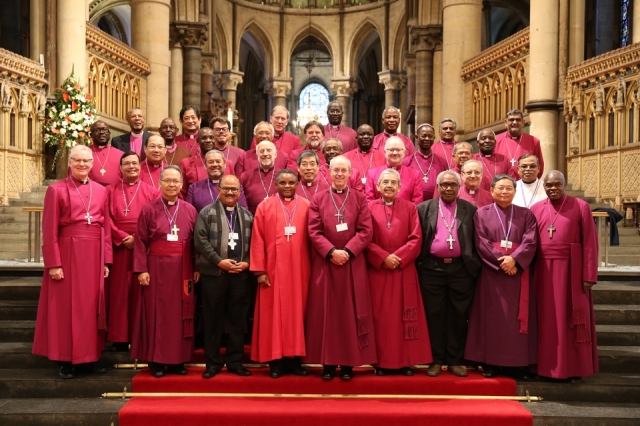 Follow through from the last meeting: At its last meeting, the primates noted that they “discussed tribalism, ethnicity, nationalism and patronage networks, and the deep evil of corruption. They reflected that these issues become inextricably connected to war and violence, and derive from poverty.” This may be one of the most fundamental issues shaping the future of the church. If you spend even a little time in churches around the Communion, you will quickly learn how church relations are often marked and marred in ways that take them a long way off from the kind of relationships God calls us to. Corruption in elections for bishops and other church offices, bishops who are created for certain ethnic groups, and divisive church politics that are rooted in underlying ethnic differences have devastated churches around the world. Here is one little example of that, but there are many others.

Happily, the last primates meeting also asked the Secretary General of the Anglican Communion, Josiah Idowu-Fearon, to “commission a study for the next Primates’ meeting” on precisely these subjects. Given the importance of these issues, we can only hope that this report will be made public, that it is the result of extensive consultation, and that it makes concrete recommendations for future action. Separately, the Secretary General has called for a debate about the “moral weight” of resolutions produced by Anglican bodies. Anglican leaders can ensure their decisions have moral weight by grounding them in study and research and ensuring they are followed through from one meeting to the next.

The agenda for the current meeting: we are told that topics on the list include “mission and evangelism; reconciliation and peace-building; climate change and environment; and migration and human trafficking.” These are all worthy and important issues and if the Anglican Communion is to have any moral suasion in the world, it must be able to speak to precisely these issues, clearly, passionately, and with conviction. The agenda for the last primates’ meeting was composed of suggestions from the bishops themselves (as is often the case for Anglican meetings). It will be interesting to see what merits the most time of these topics.

“Relational consequences”: The communique issued after the 2016 meeting was overshadowed by its Addendum A, which set out a series of consequences for the Episcopal Church, which had recently changed its canons on marriage. American Episcopalians were asked to not represent Anglicans on ecumenical or interfaith bodies, not be appointed to an internal Anglican committee, and not participate in decisions related to “doctrine or polity.” At the time, I noted that this met one definition of insanity: trying the same thing over and over again and expecting a different result. Others noted that what had once been called “relational consequences” in a proposed Anglican covenant were now being resurrected in a different guise.

The follow-through on Addendum A was, to say the least, confused and confusing. Episcopalians did stand down from ecumenical bodies and many chose not to participate in internal Anglican committees. But these consequences were the subject of a contentious bit of resolution-politiking at the 2016 meeting of the Anglican Consultative Council in Zambia when Archbishop Justin Welby sought to have the ACC ratify the consequences, Episcopalian representatives (rightly) noted that the primates could not decide who could and could not vote at ACC meetings, and various resolutions were put forth, withdrawn, amended, until one was finally passed that essentially said nothing at all but led to a debate about the meaning of the word “receive.” Later, different parties sought to put different interpretations on the same resolution and claim victory. I could expand on this story but it quickly gets tedious.

More significantly—and one might say more ominously—the consequences in Addendum A began to broaden in their applicability. Addendum A is clear that the consequences apply only to the American Episcopal Church, but as time passed it seemed that these consequences were applied to a growing list of Anglican churches. The primate of the Scottish Episcopal Church, for instance, reported that the Archbishop of Canterbury told him he would be forced to step down from his chairmanship of an international Anglican ecumenical dialogue if the Scottish church changed its understanding of marriage. Similar noises were made around the time the Anglican Church of Canada took similar steps on marriage. What’s worrisome about all this is that it is not clear on what authority these decisions are being made: who is making the decision—and by what right—to extend the consequences from the 2016 meeting more broadly than they were first presented? It will be interesting to know what, if anything, primates have to say about how their 2016 Addendum A has been, in Anglican parlance, “received” by the Communion.

Looking to Lambeth: There is often a complex relationship between the so-called Instruments of Communion, especially primates’ meetings, Lambeth conferences, and the Anglican Consultative Council. As preparations begin for the next Lambeth Conference scheduled for 2020, it will be interesting to see what, if anything, primates might do that would influence the shape, content, and direction of that conference. Will they suggest themes, agenda items, or actions that might be central to that conference? Or will they let the planning committee and archbishop of Canterbury take a lead?

No doubt lots will happen during next week’s meeting. These are just a few things that might be interesting to pay attention to. What are you looking for?

The Archbishop of Canterbury today addressed General Synod, reporting on his travels in the last 18 months to visit with every primate (senior bishop) of the Anglican Communion.

It is a goo 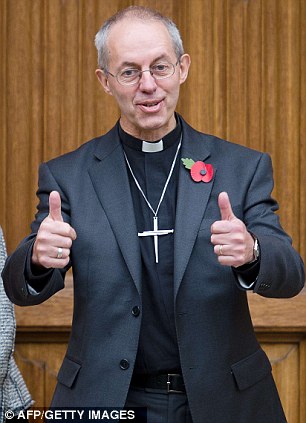 d address and he highlights several central issues to the future of the Communion: the opportunity and threat of instantaneous communication, the suffering of the church, the important day-to-day work of the church, and, simply, that Anglican churches around the world are flourishing. It is impossible to contest any of these points.

Readers of my book Backpacking through the Anglican Communion will not be surprised that I particularly liked this section:

The future of the Communion requires sacrifice.  The biggest sacrifice is that we cannot only work with those we like, and hang out with those whose views are also ours.  Groups of like-minded individuals meeting to support and encourage each other may be necessary, indeed often are very necessary, but they are never sufficient.  Sufficiency is in loving those with whom we disagree.  What may be necessary in the way of party politics, is not sufficient in what might be called the polity of the Church.

Talking with people we disagree is an important spiritual discipline—Jesus did it all the time—and like all such disciplines it self-evidently involves sacrifice.

But there were two areas of the address where I wanted to hear more.

The first is the archbishop’s continued emphasis on episcopal—and particularly archiepiscopal—leadership. This is not surprising, given that he himself is an archbishop, that he is reporting on visits with other archbishops, and that the structures of governance in the Anglican Communion, such as they are, are dominated by bishops.

Given the last decade(s) of life in the Anglican Communion, might it not be time to ask how we might credibly lift up the voices of other Anglicans in conversations about our future together? The archbishop makes no mention of the flourishing work of many of the Anglican Communion’s networks or of the serious work done in diocese-to-diocese relationships and the Continuing Indaba program. Nor does he mention a recent call by some bishops and primates for another Anglican Congress, an event expressly designed to move beyond simply hearing bishops’ voices. It is precisely in these areas that we see the kind of flourishing and sacrifice that the archbishop rightly highlights.

Again, none of this is a surprise, given his position and his interlocutors. But surely there is a more exciting way to frame a future agenda than in terms of a potential Primates’ Meeting and a Lambeth Conference, two meetings which will be dominated by men and (of course) bishops.

The second concern is related to the first. In addition to highlighting the flourishing of the church, he repeatedly discusses the divisions in the church. I want to be very clear that I understand that there are divisions within the church, not only over sexuality but (as the archbishop rightly notes) over a host of other issues as well. I have experienced these divisions in many, personal ways, as have many Anglicans around the world.

But I also think we need to be clear that there is a great spirit in the Communion of relatedness and connection in spite of (and often because of) these apparent divisions. This is not often a message we hear from our purple-clad leadership but it is my experience—and I know that I am also not alone in this—that when we move past outspoken bishops, we find not agreement on divisive issues but a real effort at reconciliation. Part of the reason I wrote Backpacking was to highlight these very voices, those that don’t agree with me on every last issue but with whom I nonetheless found deep relationship based on our common baptism and commitment to the good news of Jesus Christ.

I think Justin Welby has lots of good things to say about the Anglican Communion. I think he places great value on this aspect of his role. But his position—as all positions do—places confines and constraints on him. I hope he can continue to see beyond them and lead us all into seeing beyond our own shortcomings.