In the U.S., we hear a lot of talk about a “rising China.” The idea is that China’s rapid growth and development is moving it to a position on the world stage it has not occupied before.

In Beijing, I visited the newly-reopened National Museum of China right on Tiananmen Square. The major exhibit there spans several galleries and is titled “The Road of Rejuvenation.” Most of the exhibit was in Mandarin and I’ll confess I didn’t understand it all. But the basic theme seemed to be that in the Opium Wars of the 1840s, the “imperialist” powers of the west took advantage of China and began to enforce a decades-long period of humiliating foreign rule. But the plucky people of China rose up and first, unsuccessfully, behind Sun Yat Sen and then, successfully, behind Mao, they threw off the foreign rulers, liberated themselves, and so set themselves on a path to grow into a “moderately prosperous” society. Rather than rising to a new place in the world, China is, with this recent growth, returning to its proper place in the world after a rough century or century and a half.

Here’s the opening panel of the exhibit.

I must say that China’s version seems to have more than a kernel of truth to it. Visit places like the Imperial Palace in the Forbidden City or Summer Palace outside Nanjing or the Ming Tombs in Nanjing and you quickly realize they are at least as impressive as any castles, palaces, or cathedrals in Europe. If this is what China could produce in the past, why not believe it when they say they have a bright future ahead of them?

I guess this is why travel is so important – to be able to see things up-close, first-hand, and learn how people present themselves to themselves. You never quite realize how significant the Opium Wars – something we more or less brushed over in my history classes – are until you hear the Chinese perspective on those “unfair treaties.” 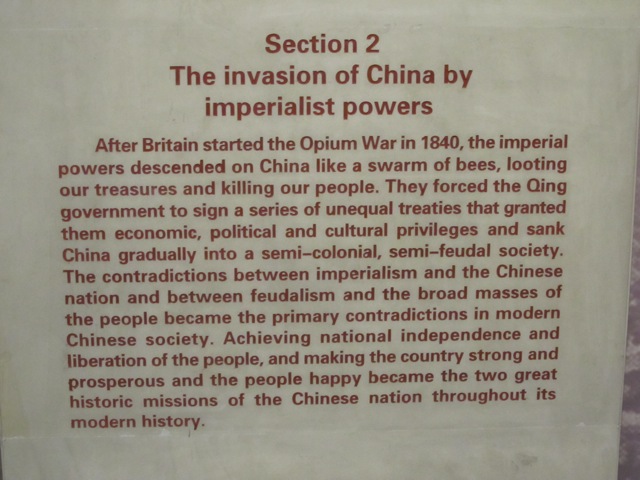 In the midst of learning about China’s self-presentation, though, little questions keep popping into my head. The Chinese story strains credulity. How come in the National Museum of China there is no mention of the Cultural Revolution? How come it presents the policies of Deng Xiaoping as more or less a continuation of Mao’s policies when they were closer to a radical break?

If you’ve been reading the western press in the last few months, you might have learned that China is in the middle of the biggest crackdown on dissent since 1989. But I spent three weeks there and saw no signs of this. I once traveled in Ethiopia, at least as authoritarian a state as China, and saw uniformed men with guns riding around in pick-up trucks everywhere. In China, there are uniformed men around but I guess the repression is much more subtle. Or else I don’t know what to look for.

Instead of seeing repression, I was impressed (and jealous) of the train ride where we surpassed 200mph. I noted the stark contrast between the public works – airports, train stations, etc. – in China’s cities and those I’ve encountered in the U.S. on my way back to New Haven.

I’m finding it hard to get a handle on my time in China and I think this all points to the reason why. China is a gigantic country with incredible complexities which we only scratched the surface of in our time there. There are numerous competing narratives, both those that are actually happening and those that are being told about what is happening. What happens when the West’s policies depend on one narrative – a rising China – and China’s depend on another – a rejuvenated China? And now the narrative of the Christian Gospel is growing in prominence throughout China. What impact will that have?

But here’s one story that has stayed with me since I’ve returned. In Hoh Hot, the capital of the Inner Mongolia Autonomous Region, we visited the very impressive-looking museum. There were exhibits on how important coal and mineral mining was to the region (and implicitly, how everyone in the region thought it was important) and one on the recent history of the region, which said, “Historical experiences show that only the Chinese Communist Party…can issue a policy to meet the needs of Mongols.”

Browsing through the paper the other day, I saw that Hoh Hot came alive with unrest not long after we left, as ethnic Mongolians protested the death of one of their own by a Han-majority coal truck driver. Internet access in the region was cut off and security forces were out on the streets.

2 thoughts on “A Rising China or a Rejuvenated China?”