So I’ve left Owerri – not without some pangs of regret at leaving behind great people and good friends – and am now (though by the time I post this will probably be gone) in Umuahia. The difference in dioceses is pronounced. Owerri is older, better established, and richer. These two regions, though only an hour drive away from one another, were evangelized by different Anglican missionaries and those differences still have an impact today.

Umuahia’s relative youth and poverty don’t prevent it from doing some great things, however. There are still large churches, impressive diocesan institutions, and capable clergy. The most interesting part of the visit for me, though, was the time I spent in the most rural of Umuahia’s archdeaconeries, centred on the small town of Uzuakoli.

During the missionary era, the different denominations split up territory. Uzuakoli was Methodist territory so there are some large Methodist churches around here. The Anglican presence was started by Yorubas (from western Nigeria) who worked on Nigeria’s once-thriving rail system. So Anglicanism has always been an outsider religion in Uzuakoli.

The archdeacon is a man named Simple (on the left in this picture – more than a passing resemblance to James Franco, I think). He is devoted to rural ministry and has spent a huge part of his career out in Uzuakoli, even though it’s not a great place to work if you’re interested in advancing your career.

His main church gets 30 people on Sunday. He has 11 other mission stations scattered around a huge territory. None of them are in church buildings. Mostly, they are just rented rooms with a few benches and a small altar, led by lay people. In a few instances, they actually meet in people’s homes. This is a far cry from the stories of overflowing thousand-member congregations I heard in Owerri.

I pressed Simple on why there had to be an Anglican presence in this area. Why not just let the Methodists (and Catholics) take care of things? They are Christian after all. Simple said that their real concern is the growth of what are called “new generation churches” – the charismatic, pentecostal, independent churches run by spirit-ordained pastors. He said many of them blur the lines between Christianity and sorcery, witchcraft, and whatnot and so he sees it as his job to teach the “raw Gospel” so that the truth will set people free. “Although there are many churches here already,” he said, “there is still need for those that preach only the Gospel.”

The most touching moment for me was in the last church we visited. There were the three archdeacons who were touring me around, a lay pastoral worker, a seminary student, and four, older members of the congregation – two-thirds of their Sunday attendance. As is my wont, I started asking questions about Anglican identity, the structure of the church, and so on. The conversation was in danger of turning into a seminar, especially since one of the archdeacons is a seminary professor.

Here we are as we are leaving. 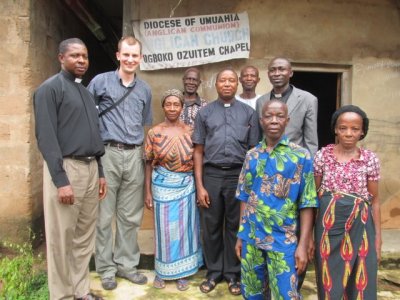 But then one of the old men stood up. He had something to say. “Sometimes,” he said, “we are ashamed to be Anglicans in this village. Other churches are much bigger and we are ashamed of our little room.

“But today you have come here. It is evangelism for you to come here. People in our village will be talking, “The white man went to that little Anglican church!’ It will be the talk of the town.”

I told him that we were both members of the Anglican Communion and that there are millions of us around the world and there is nothing to be ashamed of in being Anglican. On the way out, I made sure to smile and talk with as many people in the village as possible. One of the women in the Anglican church gave me a pineapple as thanks.