One theme that emerges again and again as I travel Nigeria is just how talented, hard-working, and smart so many Nigerians are. I met a Cameroonian woman in the airport last week and she was lamenting how “lazy” her people seemed next to Nigerians. Unfortunately, the Nigerian government is not worthy of its people. I have repeatedly seen the ways in which an ineffective and corrupt government holds back the country’s development.

A primary way this happens is in education, where government-run schools are abysmally bad. As a result, there are a huge number of private, independent, or religious schools. (Many of these call themselves “Montessori” not because they have anything to do with that movement but because they know that Montessori is supposed to be good and they want to associate themselves with that.)

It is in this context that I visited Gleaming Moon School in Umuahia. This school was founded by a husband-and-wife team, who were educated in England and have returned to Nigeria. Oliver, the husband, teaches at the local seminary. In his “spare time” (ha!), he makes sure the school keeps ticking.

But it is really his wife, Edith, who is the driving force behind Gleaming Moon. She did an education degree in the U.K. and is now determined to put those lessons into practice in a Nigerian context. But the resources in Nigeria are clearly not the same as in the U.K. So Edith writes all the textbooks and resources for the students and then has them published in Umuahia. (She was in England when I visited doing more training so I sadly was not able to meet her.) 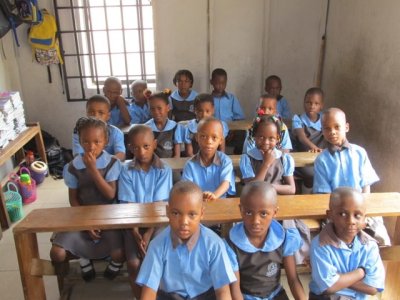 (Small class sizes at Gleaming Moon – an average of 15, compared to 40 to 50 in government schools)

Both of them are motivated by the desire to give back some of what they’ve been given in life. Oliver had to work through high school to pay his fees. (All schools in Nigeria, like much of Africa, require students to pay fees. People marvel when I tell them how I graduated from high school without paying a penny in fees.) He was then supported by his church in his university degree. He did so well in those studies that he was able to study in the U.K. Now he wants to build up some of the next leaders of Nigeria. A handful of the students at Gleaming Moon come from quite poor backgrounds and are supported by donations from overseas. There could be more of these students if there was more funding. 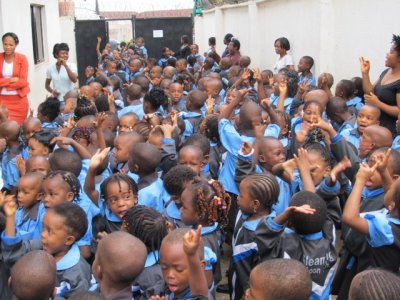 I visited the school on two different days and was very impressed by both the students and teachers. One interesting fact is that many officials in the Department of Education send their children to Gleaming Moon. They have to make the rounds of schools to ensure they’re meeting the standards and they clearly know which is best. 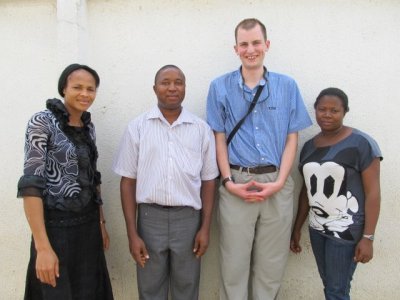 (With Oliver and some of the school’s senior administrators)

It is unimaginable the amount of dedication and work it takes to start and keep a school running. How wonderful that people like Oliver and Edith can dedicate themselves to this project. But how sad that the state of the country requires this.