Bishop Ruben Akurdit of Bor continues to make the media rounds via his mobile phone. Today, the British channel ITN spoke to him for a story. There is little that he adds that wasn’t in yesterday’s BBC interview, though this line grabbed me:

There is no supplies, completely. Nobody is giving supplies.

Delivering relief supplies to South Sudan is challenging at the best of times. (I was involved in one such trip once.) But in a war zone, it is even more complicated.

The footage in the story, first from Awerial and then from Bor is disturbing. It shows some of the destruction I was writing about a few days back.

One of the questions I ask in my new book, Backpacking through the Anglican Communion, is how we can create a situation in which the voices of all our sisters and brothers in Christ can be genuinely heard. Ruben is a bishop. He has a better chance than many South Sudanese in having his voice heard. Still, international media coverage of South Sudan (both before this current violence and before) tends to overlook the church, even though the church is the single most important social institution in the country. I’m grateful for interviews like this in which Ruben and others (such as Archbishop Daniel Deng Bul, who spoke to the BBC yesterday) can speak for themselves.

As the coverage continues, however, I hope that interviewers will begin to ask these church leaders questions about topics other than how awful everything is. Archbishop Daniel chairs a national reconciliation commission, the need for which is even more acute now. Church leaders have been consistent in articulating a vision for the future of the whole country that is hopeful and realistic. It’s time for international media to start reporting on that as well.

Still, the frequency with which church leaders keep popping up in news report testifies to the simple fact that when everyone else leaves—including U.S. Embassy staff today—the church remains on the ground. We should not underestimate the importance of that.

One final note: the ITV report uses my photograph of Bishop Ruben. They didn’t ask permission but I don’t mind. Still, it might be time to trot out a new photo. Here’s Bishop Ruben, with his predecessor Nathaniel Garang at the Bor airport in April 2013. 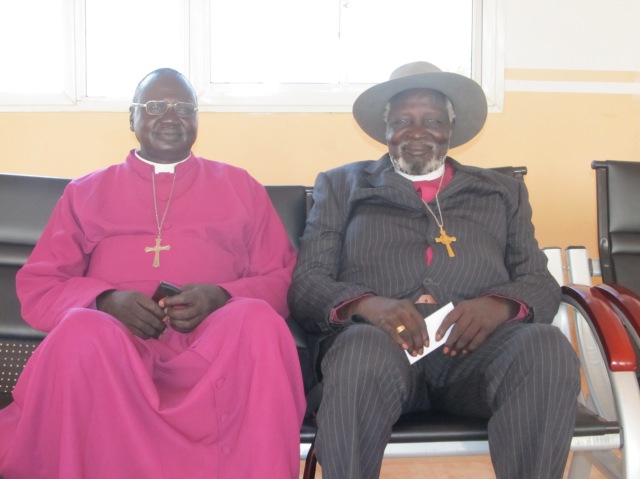