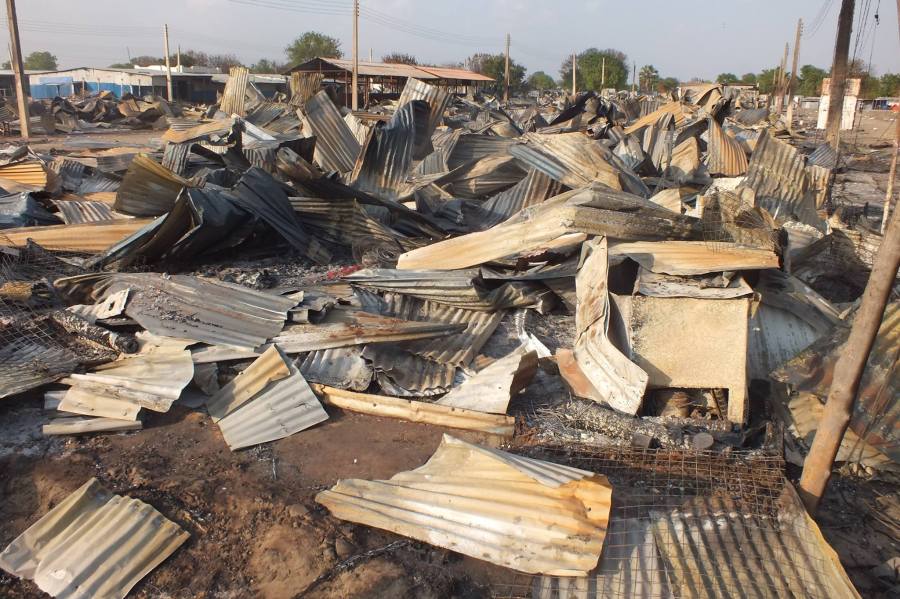 As a peace deal in South Sudan appears to take hold, more and more pictures are coming out of the areas most affected by the recent violence. This is the market in Bor, a town I spent time in last year. 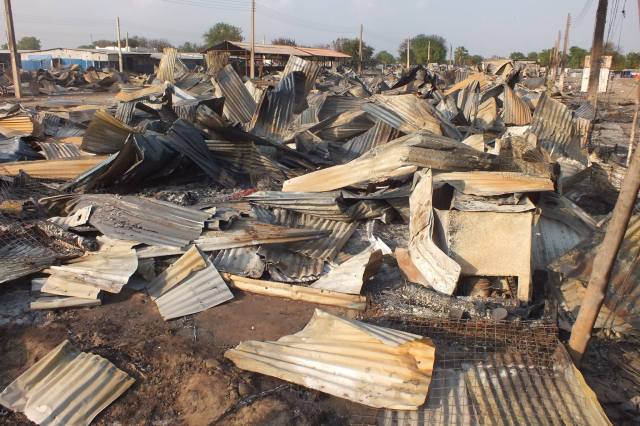 Most horrifying of all has been the pictures of a mass grave at St. Andrew’s Cathedral in Bor, a church community I wrote about in a recent Christian Century article.

(These photos—and many more—are on the Facebook page of someone I met in Bor last year. He has made them available to anyone to see.)

As I have been reading about the macro-level of the violence—number of people displaced, relief needs, etc.—I have been trying to stay in pretty close contact with a friend of mine in Bor. For the purposes of this post, I’ll call my friend S.

Like many other reasonably-educated Dinka, S.’s wife and children live in Nairobi, Kenya. They are part of the large and persistent Dinka diaspora that was created by the civil war in the 1980s and 1990s. One of the reasons it is so persistent is that people like S. decide that because the schools are better in Kenya, they would rather their children grow up there, even if it means being apart from them. S.’s job with the church meant that he could afford to pay rent for a very small place in Nairobi for his family.

In January, S. wrote to me say that he was “traumatized” by all that had happened. His mother and sisters had fled to the rural areas. His entire diocese had, essentially, been displaced. Significantly for S. and his family, the violence meant that he was no longer drawing an income from the church. He had no idea how he was going to care for his family.

This week, S. was in touch to say that his family’s landlord in Nairobi is threatening to evict them because they have been unable to pay the last three month’s rent. Unless he gets the money—about $650 in total—his family will have to move from Nairobi to Kakuma Refugee Camp. Kakuma is the large camp in arid and remote northwestern Kenya, which was founded in 1992 to care for the so-called “Lost Boys of Sudan,” but now remains as a major community for people of lots of different nationalities. It is far inferior to living in Nairobi, however. It is isolated and cut off from the rest of the country and the schools are not nearly as good. It also means upending the lives of his children and cutting his wife off from her supportive social network.

On one level, S.’s story is familiar: bread-winner loses income, family displacement ensues. This happens as much in England and the United States as east Africa.

But on another level, S.’s story drives me crazy: THIS DIDN’T HAVE TO HAPPEN! The loss of income and the displacement is one microcosmic impact of violence that is the result of a struggle for control among member of the political class. If countries like South Sudan are to move forward, they need people like S.: educated, dependable, committed to their country and its future. In turn, people like S. need the same thing from their leaders. They need to be able to make long-term plans for the futures of their families. But they can’t do this if the very stability of the country is constantly in doubt.