Last April, I was in Bor, South Sudan on the Sunday after Easter, the so-called “Low Sunday” because attendance (and the energy level) is generally a bit less than the previous Sunday. The announced attendance at St. Andrew’s Cathedral in Bor that day was 1,249. It was, as many Dinka services are, a high-energy worship service (which I wrote about in this Christian Century article).

Bor has had a traumatic two months. Control of it switched hands several times between the government of South Sudan and a rebel force. The centre of town was destroyed. The Sudan activist John Prendergast recently traveled to Bor and filed a lengthy trip report, which is devastating to read—they drove down one empty street; when they came back a few hours later, there were bodies lined up along the road that had been found in the interim and had been brought out for burial in a mass grave.

I have been thinking particularly about St. Andrew’s Cathedral and the community I stayed with there. Some women priests and others who were killed have now been buried in a mass grave on the cathedral grounds. A huge percentage of the diocese has been displaced across the Nile River.

And it shows in church attendance. A friend of mine in Bor posted these photos on Facebook of last Sunday’s service. 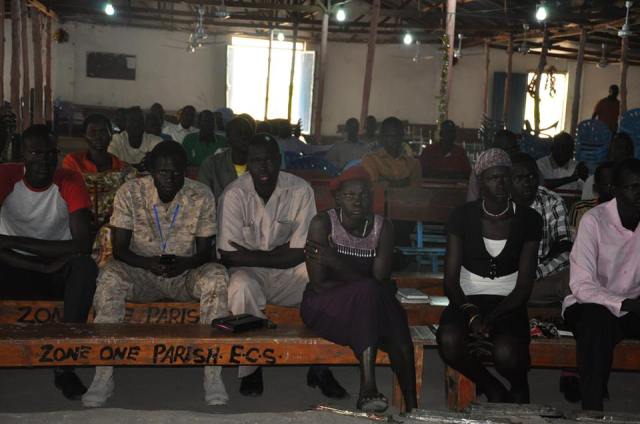 There is essentially no one there. Whereas when I visited, there was not a spare seat or corner of bench, now you can see the sea of empty places.

The dean of the cathedral is a man named Thomas Agau Kur, who has been interviewed by several of the handful of western reporters who have made their way to Bor. He has been presiding over funerals at mass grave sites. But he told one that he is concerned about the dead bodies in outlying villages and the lack of priests there to perform the rites:

There’s no funerals!  Who’s there? The whole town is deserted, who can make the funerals?  I’ve been used to being in the place of the burials like this morning, where that mass grave of 134 are buried, and one is still being dug, so that to put the other people who are still being collected in the towns.

Another friend in Bor wrote to say that he estimated that only about half of the bodies in Bor had been collected and buried. So the task will continue for some time.

What to say about all this? At times, it seems the situation defies description or response. If nothing else, however, it is a reminder of the way in which Christians are people who called to enter into the pain of the world, so that together we may come to share in the resurrection—no matter how distant or faint that prospect may seem.

One thought on “Back to church in Bor—or not”