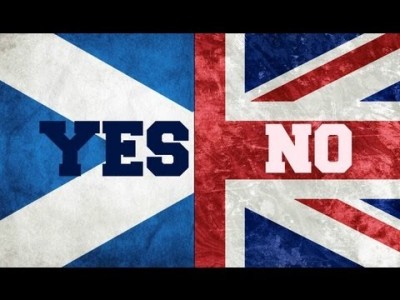 Friends and family in the U.S. have asked me what to make of the impending referendum on Scottish independence. I have no more standing other than that I have been to Scotland (more than once!) and am a token North American in the British Isles, but here’s one view.

As an outsider, particularly one from a country where distances are vast, I once naively thought that, of course, the Scottish and English—together on a small island—would have a fair degree of back-and-forth and fellow-feeling. But I am no longer surprised to hear stories of the social distance between the two places, whether that is the friend in Cambridge who has never been to Scotland (“when it came time for holiday, there were always warmer places, farther south, I could go”) or the Scottish people who have never been to London and show no interest in doing so. On a visit this summer to the Inner Hebrides, I could sit in a village and think to myself, “Yes, I would need some convincing that this place has anything much in common with London.”

I generally share the view that for the Scottish to vote for independence would be short-sighted and self-defeating. But I think I can understand a tiny bit of the energy motivating the vote. There are lots of difficult and tragic situations in the world right now that need to be addressed—Scotland, independent or not, is not one of them. One danger of independence, however, is the opportunity cost. Just think of the sheer amount of energy, political capital, and people-hours that will need to be devoted to negotiating independence over the next several years that could usefully be spent on some many other issues.

Perhaps the most important aspect of this whole campaign has been what it reveals about the British political class in Westminster. In this year alone, there have been two sets of elections—for local government and for the European Parliament—in which the protest party, UKIP (the UK Independence Party), has done remarkably well by campaigning against the system. The Greens, reinvented as a protest party, are now also polling better than ever. This is a trend across the north Atlantic world: in various ways in various countries, protest parties have burst on the political scene in recent years. These populist leaders skilfully channel voter discontent by directing it against incumbent politicians without ever indicating how they would genuinely work to change the system. Alex Salmond, the Scottish independence leader, is just one more such leader, successfully framing Scottish independence as a referendum on a broken system. Thursday’s referendum, however, has greater stakes than any previous such election, however, when a protest vote might be a safer bet.

I do think, however, that in Britain the indictment of the political class has some merit. One of the most depressing facts about the British parliament is that the three main party leaders—all men in their 40s—and several of their top deputies have essentially done nothing else in life except attend Britain’s finest schools, work in party politics, and climb the greasy pole to the top. The trouble is that skills needed for this are vastly different from the skills needed to offer a compelling vision for the future and lead a country through difficult times. There are no shortage of photo-ops and sound-bites on offer. What appears to be missing is any evidence of personal, sustained, direct engagement with the pressing issues that affect so many people’s lives.

So if Scotland votes for independence on Thursday, it will be an indictment of the political class in this country and a reminder that the politics of protest are alive and well. That would be a shame. But it would also accurately reflect the abysmal state of our politics in these last several years.

And it all raises a question for another post—in the midst of our broken politics, what role is there for the church and for Christians more generally?