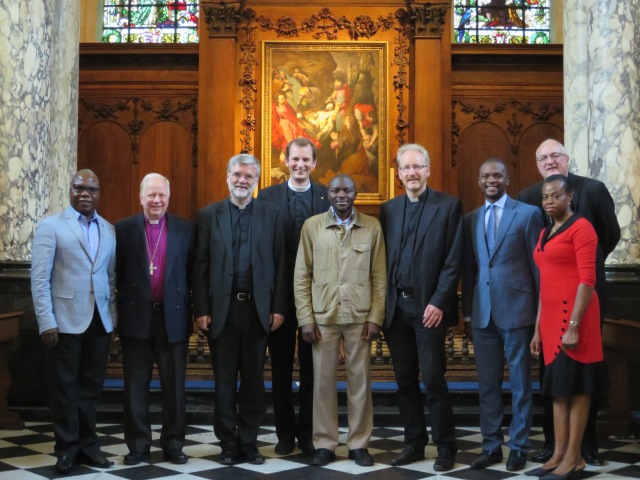 Last week, I attended a dinner in Cambridge that brought together the two bishops of the Diocese of Ely with about seven or eight leaders of black Pentecostal churches in Cambridge. (Picture above taken before everyone arrived.) You may have heard of these churches: denominations like the Redeemed Christian Church of God or Kingsway International Christian Church that were founded in non-western countries but are gradually establishing a presence in the U.K. and other western countries. There are two RCCG congregations in Cambridge, for instance. The idea was to eat, talk, and pray together so that in learning more about one another we could see where we were being called to work together.

One thing that often strikes me in meeting leaders of diasporic churches is the nature of ministry. Every one of the black Pentecostal leaders at dinner was in what, in C of E parlance, we would call self-supporting ministry. In the U.S., the word would be bivocational. Every one of them had a full-time job to which the church leadership role was additional. One was a nurse, one a software engineer, one a solicitor, and so on and so forth. (They are, of course, not alone in this: the Latter Day Saints have an almost exclusively non-professional leadership class.) By contrast, the Anglicans at the dinner all earned their living working in the church.

Listening to their stories of leadership, I was struck how they seem to do as much or more with their congregations as many full-stipend clergy: Sunday services, Bible studies, collections for the poor and needy, and large festival celebrations. They also plant new churches. One difference we noted in our conversation was that the black Pentecostal churches are more active in church planting than the Diocese of Ely. They certainly do more of it. Not all of the church plants of the main RCCG congregation have been successful, but a couple have been.

I began to wonder if there’s a connection between their approach to ministry and their ability to plant churches. In the C of E, we have this idea that you need a fully-trained cleric to lead or plant a church. In the RCCG if all you’re looking for is a committed lay person, the task becomes easier. It was easy, sitting in that dinner, to think that the requirements of the priestly class of the C of E are actually stifling the church, not enabling it. It takes a long time to make a priest in the C of E (sometimes not long enough, I think) and I am deeply committed to that process. But still.

But there was a flip side to our conversation. Many of these black Pentecostal leaders wanted further theological education themselves. Some of these denominations have training colleges that they may have attended but this is more in the way of continuing education. These people wanted to study for degrees to fill in what they felt they were lacking. I can’t speak for them but from their perspective I sensed that an educated leadership class seemed like an asset they wanted to develop as well.

Perhaps there is a way to square this circle: on the one hand, theological education remains vitally important. The church should support it in every way possible. On the other hand, ministry cannot be seen as the preserve of an elite professional class. Lay people are leaders in ministry just as much as those who get paid for it.

The word that I left the dinner with was this one: permission. These black Pentecostal churches give permission to their members to fully engage in ministry as they are called. They experiment with new approaches. Sometimes they don’t work. Sometimes they do. But it’s a low cost approach. How can we create a culture of permission-giving in our churches?

It was a great dinner—and this is only a small piece of the puzzle. There are diaspora churches from Asia, eastern Europe, and many other places all active in Cambridge and we want to expand the network of relationships as we go forward.