So I made it to Abyei and back in one piece. But I’ve been delayed in writing about it by a combination of a lack of Internet access, lack of electricity, and blogger’s block. (But not writer’s block. An article I wrote about the visit is on Episcopal News Service.) Hopefully, you are a close follower of the situation in Sudan and know exactly why Abyei is significant. If not, here is a very brief summary.

Abyei is to Sudan like Kashmir is to India and Pakistan: a contested region that both sides want. You often see Abyei described as “oil rich” but this is not as true as it once was. The oil is mostly gone. But it is an incredibly fertile area that southerners and northerners want to graze their cattle and grow crops. In January, people in Abyei were supposed to vote to decide if they wanted to be with the south or north. That referendum never happened because no one could agree who was allowed to vote. In May of this year, northern troops and militias seized Abyei town, the major town in northern Abyei. That displaced a huge number of people, many of whom are now in Agok, the major town in southern Abyei. (Others are further south, including in Wau, creating more need there. The church with its limited resources has decided to focus on people actually in Abyei.)

There’s a river that divides Abyei region into two. We stayed on the south side of the river, where the refugees are and the northern army isn’t. But we had a Sudan People’s Liberation Army escort on our way into Agok because the road we were traveling on is closely watched by the south.

Ecclesiastically speaking, this is all part of the Episcopal Diocese of Aweil and is Bishop Abraham Nhial’s territory. Even had he wanted to go to Abyei town, he can’t. The bridge over the river was bombed by the northern army. 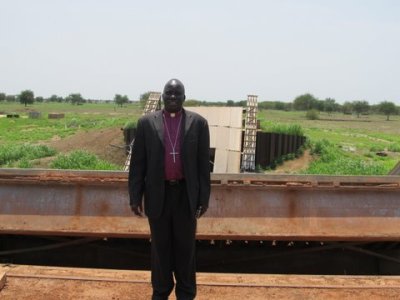 There are seven priests and three deacons (or nine priests and one deacon – I heard both) to serve the thirty-odd congregations in Abyei. I was driving in with two priests and occasionally one would point and say, “We have a church there.” He was pointing at large trees. The congregation meets underneath.

We also passed many burned out homes.

The villages we drove through felt eerily (a cliché adjective, I know, but true) empty. Everyone is seeking safety in the towns. Significantly, very few of the fields we passed have been planted. Too many people have fled, which means this planting season (there are two per year in South Sudan) has been missed, increasing the demand for food aid. The other notable part of the drive in was that we passed not a single cow. The Dinka people are pastoralists and cows play a major role in their culture. Around Wau, herds of cows are everywhere. But in Abyei, they were all seized and driven north during the violence in May.

We spent a few nights in the church compound in Agok. The church itself is a long, mud-walled, thatch- and tarp-roofed building. There are many refugees living here, mainly in the classrooms of the church-run school here. I talked with many of them and heard their stories of fleeing the sudden attacks and walking through the bush to get here. The UN has had a presence in Abyei for several years but no one trusts them anymore. During the attacks – both those in May and similar ones in 2008 – some people sought refuge in UN compounds, were denied, and were killed as a result. Under an agreement reached in June, Ethiopian peacekeepers will deploy to the region. But everyone is waiting to see if they’ll do any better. No one has much hope that they will.

Although it is estimated that tens of thousands of people were displaced in the attacks, Agok didn’t seem that unusual as a town. In part, I couldn’t see what was in front of my eyes. Some huts meant for one family now have four families living in them as people seek shelter with their relations. But also, the human capacity to cope is remarkable. People have lost everything but are already working on rebuilding their lives. There’s not enough food, shelter, or medicine in Agok and that is causing huge problems but people just keep going. That’s not to say they don’t need help. But I never fail to be impressed by the resourcefulness of people in difficult situations.

The roads to Abyei are in horrendous shape. Our four-wheel drive truck got stuck in the mud at least three times, once for nearly two hours. The trucks carrying the relief material also got stuck and broke down. (The Wau-to-Agok drive is supposed to be eight hours. It took one truck 60 hours to make it.) As a result, we all arrived at different times. Unfortunately, the bishop and I had to leave before the church distributed any food so I don’t have any pictures of that. But I am still grateful for the few days I had in Agok, visiting with church members and learning about their experiences.

The bishop pushing his car out of the mud. No dry cleaners in Agok.

Hopefully, people will begin to trust the peacekeepers soon and return in time for the second planting season. Maybe then, students can return to their classrooms – right now, they are meeting under trees – and life can return to “normal.” But in such a sharply-divided area, it’s hard to see what “normal” might look like. 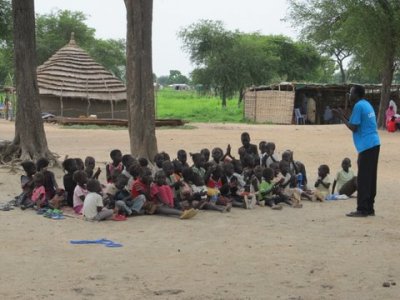 6 thoughts on “In Abyei”