About eighteen months ago, I spent some time at a seminary in Nigeria. Shortly after having a contentious conversation with a group of students’ wives about homosexuality, I peeked into the library. This is what I saw:

I’ve also spent time at a seminary in South Sudan. There, I also found a lot of people who found homosexuality to be difficult to reconcile with Christianity. Their library looked like this: 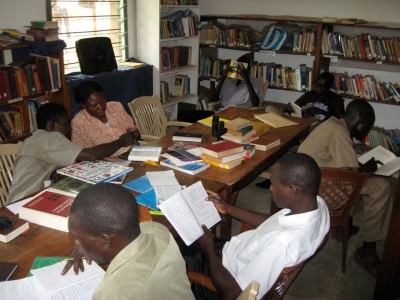 At Yale, where I went to school, I had access—literally—to millions of volumes and all the latest scholarship. At both these seminaries, the books are relatively few and are overwhelmingly old: there were few that were less than thirty years old. Yet at both places, I found students who were eager to read whatever they could get their hands on.

Think about where theology and the church were thirty years ago on the question of homosexuality. In that context, is it any wonder that we have such sharp disagreements on these issues?

Bray’s idea in founding SPCK was that Christians should have access to Christian scholarship and literature. He envisioned libraries in churches and an educated clergy. SPCK helped start some of the first libraries in the American colonies that focused on church-related material.

When we look at these libraries in places like Nigeria and South Sudan, we are reminded that Bray’s work is not yet done. There are really important insights of the last generation that have not been shared yet with our sisters and brothers around the world, and not just on questions of sexuality. (The Anglican Theological Review’s Seminaries Abroad Gift program is one very small way in which this work is being done.)

The commemoration of Thomas Bray is an opportunity to reflect on a visionary Anglican. But more importantly, it’s a chance to reflect on the vital need to continue his important work.